Mississauga Library Workers Union is pleased to announce that it is once again CUPE Local 1989.

We enrolled all full-time non-management library workers. Within a few years, the Library had far more part-timers, weakening CUPE Local 1989’s negotiating position. On the fourth attempt, part-timers and pages were signed up and a separate contract was negotiated for them.  To further strengthen our position at the bargaining table, in 1995, the part-time and full-time collective agreements were merged into one.

CUPE Local 1989 led the formation of Peel District CUPE Council, was among the first CUPE locals to join what is now Peel Regional Labour Council, and led the merger of CUPE Local 966. Being part of a bigger local had some advantages and some disadvantages.  As one of sixteen units of CUPE Local 966, there was much comradery and support. Collectively, we could afford a full-time union executive.

Mississauga Library Workers were an active part of CUPE Local 966 with members on various committees participating in rallies, parades, pickets, and social events. In the process however, we felt we had lost our unique identity as Mississauga Library Workers. We decided, as a unit, that we wanted to go back to being able to govern ourselves as a smaller local with a single collective agreement.

Now, 40 years after we first applied for a CUPE charter, we applied for a transfer of jurisdiction to once again become CUPE Local 1989, Mississauga Library Workers Union. The CUPE National Executive Board approved our charter and reassigned us our old number. One of our talented members designed a beautiful new logo. 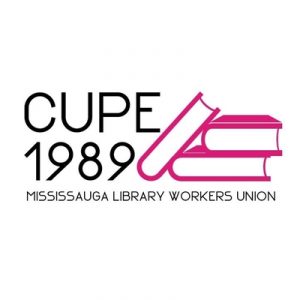 Since most of our current members were not part of the union 40 years ago, there must be much more to CUPE 1989’s history than we can know. All Mississauga Library workers, past and present, are invited to tell their CUPE 1989 stories which we hope to share on this website. See what you can remember and tell us about it. Send in your photos, too. We would love to hear from you.