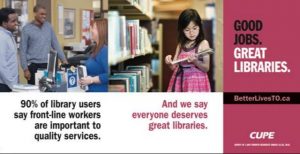 Yesterday, the members of CUPE Local 1989, Mississauga Library Workers Union, voted overwhelmingly to strike. Amid massive turnout in three separate meetings, 96% of the members in attendance said they are willing to take strike action in order to win a fair contract for all members. The July 4th strike deadline coincides with the start of summer programming, the Library’s busiest time.

We, the members of Local 1989, love our jobs. We are very proud of the quality services we provide to the community. We are skilled workers, and our services are valued and loved by the residents of Mississauga. We ask only to be treated with respect, and for all our members to be able to provide a decent life for themselves and their families.

Our Library Pages — the people who put the books on shelves — deserve a living wage. Currently they earn only pennies above minimum wage, putting them well below the poverty line. Most are adults who support families!

Our part-time workers — 56% of our membership and growing — deserve paid sick time, at the very least. They currently have no benefits, no paid sick time, no paid bereavement leave, no paid vacation. They have nothing but a constantly changing schedule that prevents them holding down a second job, yet offers only 12-16 hours a week, often less. Their contracts are the very definition of precarious work.

Our full-time and part-time workers received a 0.5% salary adjustment in 2014, and the same in 2015 — 1% over two years! With the cost of living increasing by about 1.8% annually, we are falling farther and farther behind. Meanwhile, Library Director Rose Vespa enjoyed a healthy 7.36% increase. City Manager Janice Baker earns more than a quarter-million dollars per year. But Mississauga Library Workers are being told to make do with a 1.5% increase. When we point out that we received only 1% over two years, we are told, “That’s in the past.”

Commissioner of Community Services Paul Mitcham and City Manager Baker regularly message City employees, telling us about all the wonderful things happening in Mississauga, and how much they value our hard work and dedication. For Library workers, these messages are a sad joke, serving only as a reminder of the huge gap between the City’s self-image, and the reality of being a City of Mississauga employee.

When Mayor Bonnie Crombie talks about reducing poverty in Mississauga, we wonder why 28% of our membership is paid poverty wages, and why the City is staffed increasingly by part-time, precarious workers, with staffing levels stretched to the breaking point.

The members of CUPE Local 1989 challenge the City of Mississauga to set the standard for employment in our city. It can start by treating its library workers with fairness and respect.