While Ribfest took over Celebration Square, CUPE 1989 members had another satisfying day in our communities. The managers that the City has assigned to “monitor” us (their word) and the special outside security detail came along for the ride. Because, you know, library workers are a big threat to public safety.

In our members’ words and pictures, here is a bit of our day.

“I was at Erin Meadows Thursday afternoon. A customer came to return a book. He said he just came back from his vacation and he wasn’t aware of the strike. When I explained our situation and gave him a flyer, he was really mad and told us he would send emails to the Mayor and Sue McFadden. He said: ‘It’s ridiculous, I can’t believe City is treating part-time staff like this.’ He also told us he will be supporting us throughout our fight. He is a customer at Erin Meadows and Meadowvale.”

“The Thursday picket at McKechnie went well. One customer was so upset with the city she called the Mayor right then and there. Of course once we heard that the City was refusing to budge in the talks, we got fired up even more and the flyers were passed out to customers fast and furious. I can’t begin to tell you how angry that piece of news made me, but that is another story. I think it was great getting out to the branch and talking to our customers. It certainly seemed a lot quieter without the library open. … This is a tough fight but we will be there for however long it takes.”

Most of Friday morning my striking buddies and I were on the mall side of the Ribfest and were handing out flyers. We heard some varied stories. We talked to a man who is part of the rotary and is a pastor. He mentioned he was the one that brought water bottles for the strikers. He is totally supportive. We also came across someone who said would call the city and say ‘I would have emailed you, but my access to the internet at the library isn’t currently available’. I thought that was a great line.

“It was a very productive and enjoyable day. We met a family with two kids. One little girl rushed up to hug three of us. We were so touched by this, and obviously their parents were upset about the closure, but they supported us. We are like the usual front people, meeting with our customers. I agree with Rose that we are wonderful staff, and it is the staff who make library successful. However only she has a 7.3% increase.”

“I absolutely loved talking to the public today at Port Credit. We spoke to small business owners. They are completely committed to helping the Library. We also approached people walking the streets. One lady from Australia, who always visits the library with her grandchildren at Port Credit when she visits, was disappointed this year. We also approached a group of young men (18ish); one pipes up and says “I called 311 yesterday”. A page who was with us yesterday and felt uncomfortable approaching people was passing put leaflets and talking to customers – fantastic!!!”

“Our customers at Malton took our striking to heart. Here’s some of the response from our regulars:

“One customer who is an author (our libraries carry copies of her books) said: ‘This is stupid. Management is making so much money and you guys are doing all the work. I will email Bonnie!’

“Another customer, who is partially blind and comes to Malton every day to borrow the guitar books, said: ‘It is very boring without the library. I really miss it and being in there.’ He said he would email the Mayor.

“A female minister, who we help with printing, said: ‘I can’t believe this is happening. You people are always there for me when I need help, especially with printing my flyers and sermons. I miss it very much and some of your high school students were asking me why was the library not open, we wanted books to study for our summer school. I will definitely write to the Mayor.’

“One college student took a pile of flyers from me and said she would pass them around to all her friends. She said: ‘We support you fully and love the library.’

“Another regular customer said: ‘Management should be flexible and treat staff in a more humane way. This is really sad!’ He comes to the library every day with his children to use the computers. He said: ‘Poor people, the homeless and students needs the library!’ He said in his former country he has nothing like the library. He said he will write to the Mayor!”

About 20 of us covered the front doors and a highly visible intersection at the corner of Burnhamthorpe and Dixie. We had pink CUPE flags and three picket signs that indicated we work at the library. We handed out dozens of pink flyers and continuously urged people to contact the mayor. Several buses stop at that location, and everyone who got off was made aware of our cause, if he or she wasn’t already. The overwhelming majority of those we encountered were highly supportive. Even three police cars honked! The best part, again, was how our group came together across all job classifications: full-timers, part-timers and pages. Twenty-year veterans and relative rookies. 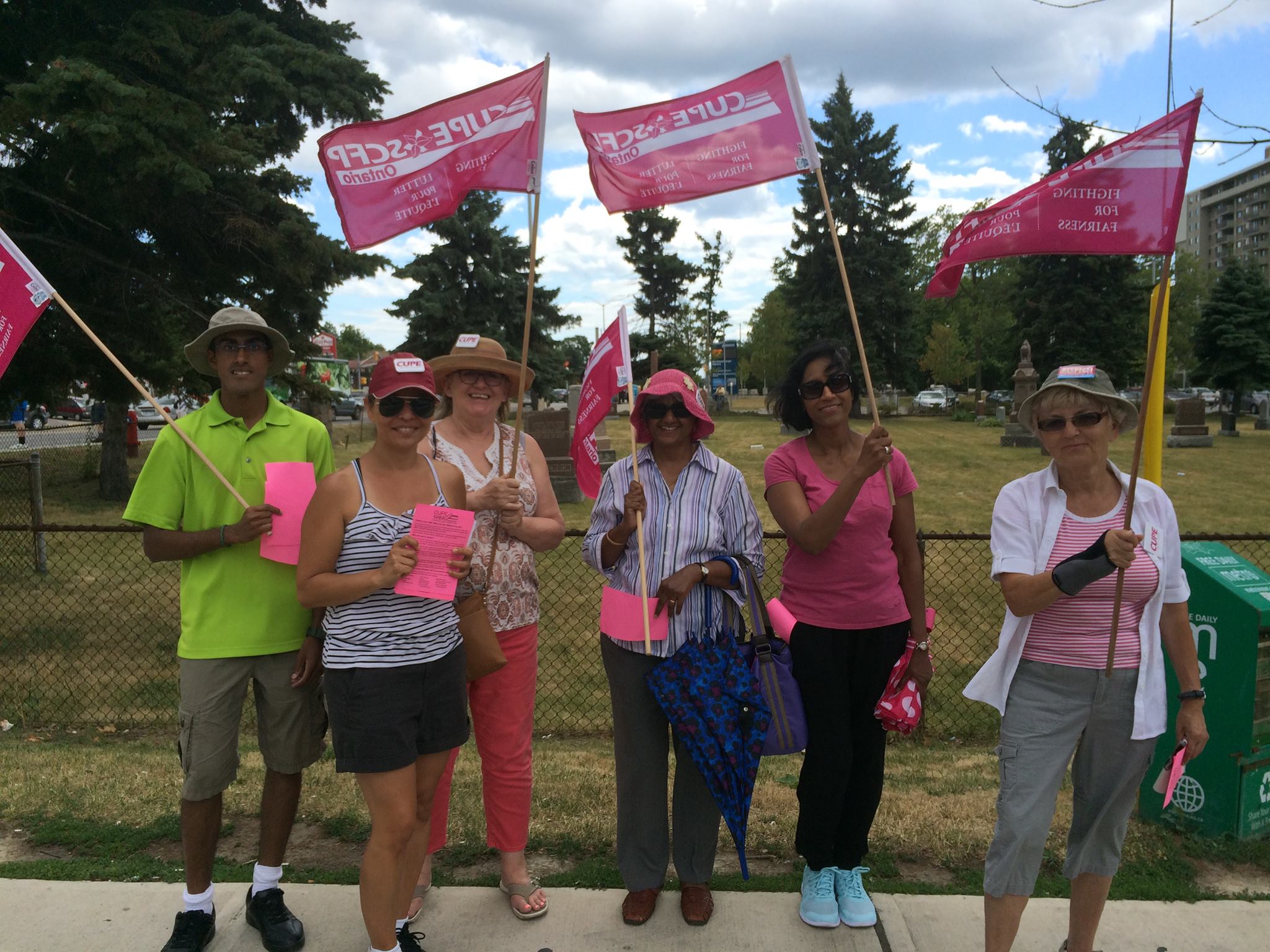 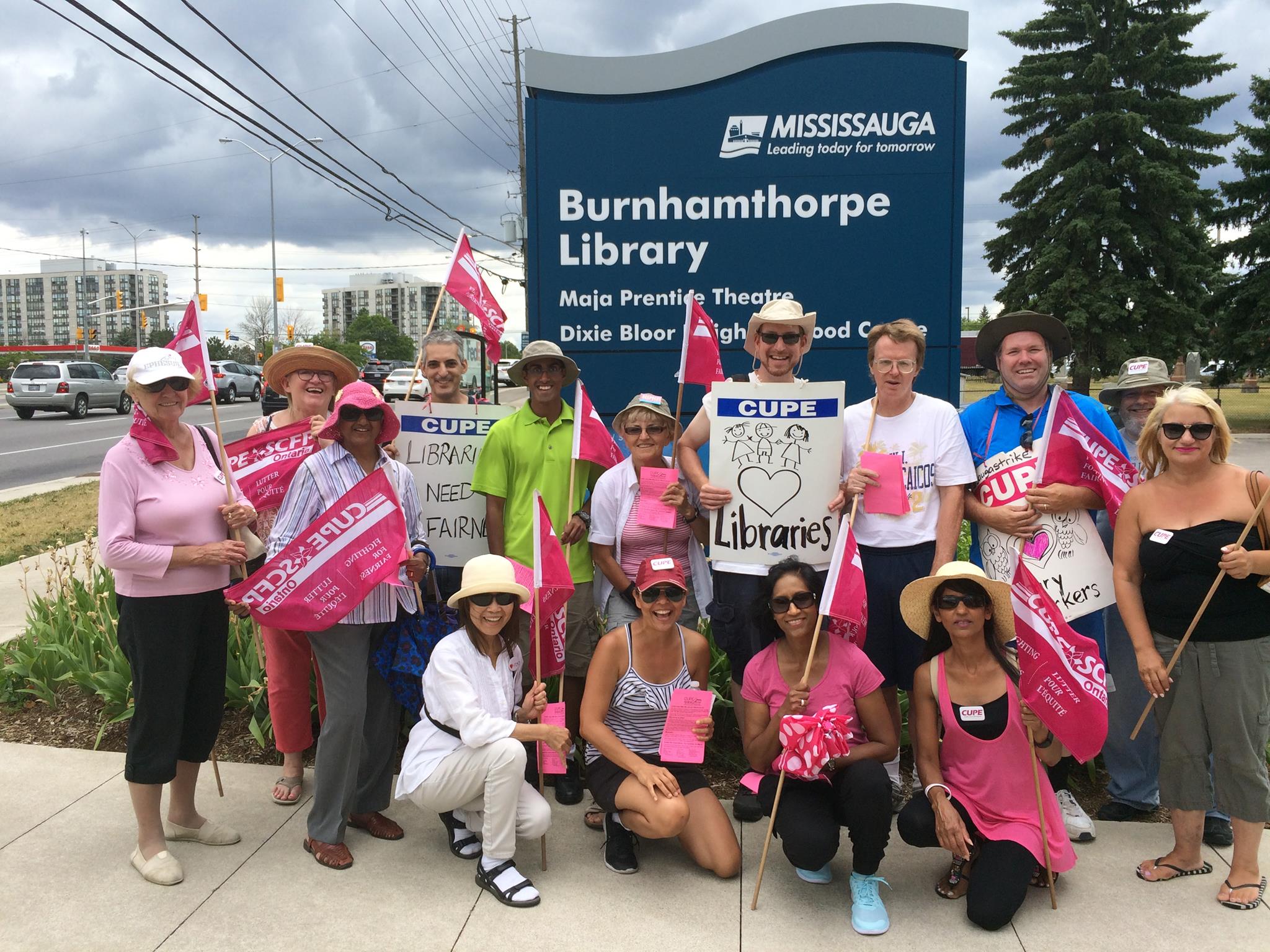 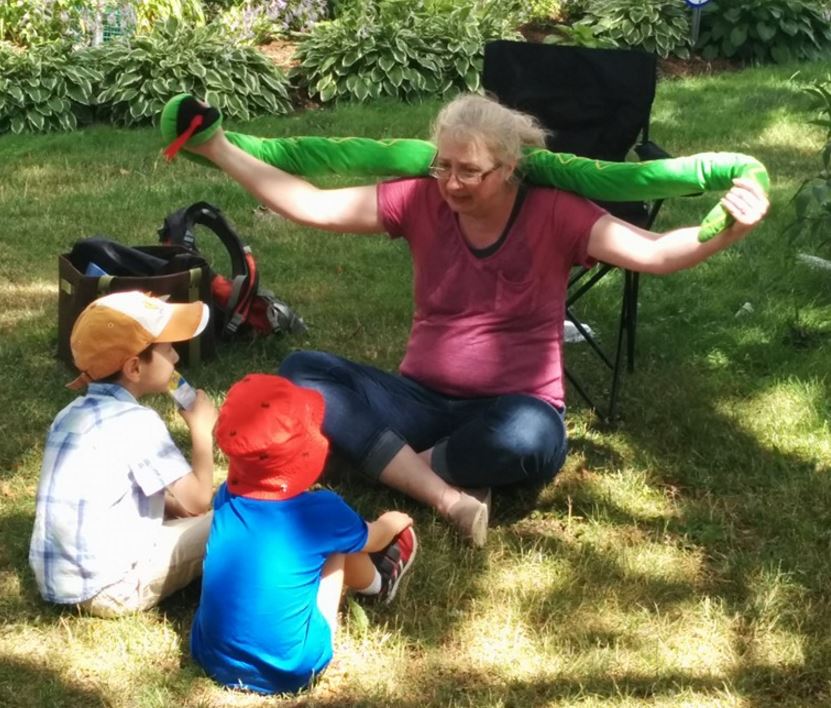 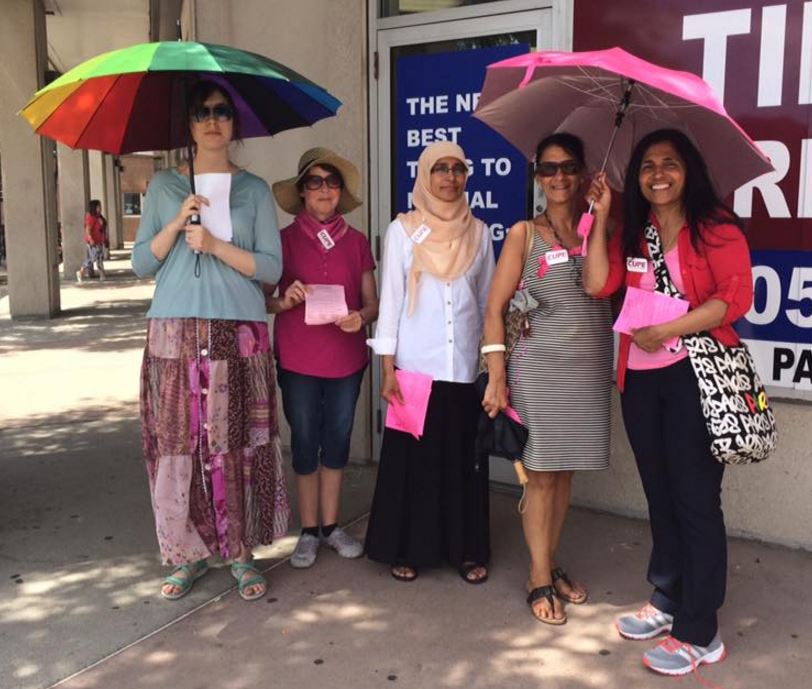 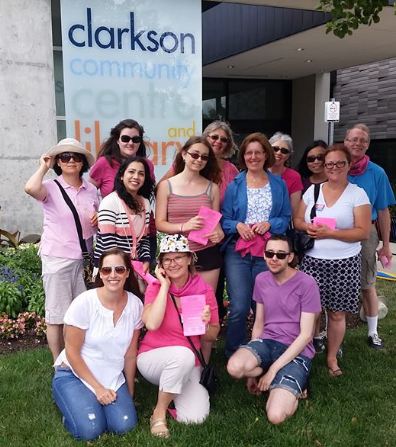 Please sign our petition, and tell the City of Mississauga: Give your library workers a fair deal!