This post debuts a new feature on the CUPE Local 1989 website: labour-themed book reviews and readers’ advisory lists. (Readers’ Advisory is library-speak for suggesting books or movies you might enjoy.) If you read a book or see a movie that you’d like us to review, drop us a line at president@cupe1989.org.

If you’re a certain age, you may remember clocks and watches with glowing green dials. The dials were painted with radium, the radioactive element discovered by Marie Curie. We had clocks like this when I was growing up. I have a distinct memory of my mother saying, “The women who worked in the factories where these were made got very sick. They had to put the paintbrushes in their mouths, in order to paint the tiny numbers and dots, and they all got sick, and some died.” 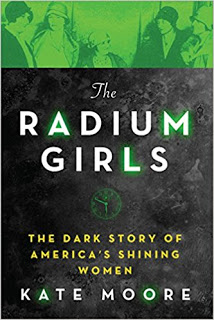 I never forgot that — yet I never heard it mentioned anywhere else. Who were those women? Why were they putting a radioactive substance in their mouths? When I saw the title The Radium Girls: The Dark Story of America’s Shining Women, I knew that someone finally had answered those questions. The story of those women was finally told.

And what a story it is.

The young, working-class women in Orange, New Jersey, and Ottawa, Illinois, who painted radium dials thought they had it made. Not only was the pay better than most work available to women, but they got to work with radium, the exciting glow-in-the-dark substance that everyone was talking about. When one “girl” got sick and died, a doctor ruled the cause of death was syphilis (despite zero evidence and the impossibility of that claim). Another death was ruled pneumonia (also wrong). But as more and more of the workers became sick — with horrific and inexplicable symptoms — the pattern became obvious.

When the watch-painting first began, in the late 1920s, the danger of radioactive substances was still largely unknown. Faced with suspicions as multiple workers became sick, the company commissioned a study… then suppressed the findings.

As the women lost their teeth, suffered broken bones, lost their hair, lost pregnancies, became weak, and died, their employers worked overtime at suppressing the truth, denying responsibility, refusing to pay for medical care, and blaming the workers themselves.

If this story was fiction, the companies’ actions would be barely credible; readers would say the author laid it on too thick, making the company out to be monsters. Some of the dirty dealings left me gasping. At one point, the women were all seeing the same doctor. They didn’t know that the doctor worked for the company. Then it turned out he wasn’t even a doctor! Officially, the women died of radium poisoning. But this book leaves no doubt: these workers were murdered.

Labour laws at the time were in their infancy: if a disease wasn’t on a short list of specific conditions, workers had no legal recourse. What’s more, even those few conditions were subject to a strict statute of limitations — for which radium poisoning, by definition, would never qualify.

The media and publicity were much different, too. The two factories in two different states, with workers suffering through the same ordeals, were unknown to each other. When the New Jersey cases finally garnered national and international attention, the workers in the Illinois factory realized they were in the same situation. And when the Illinois women took the company to court, the town turned against them. With the country in the grip of the Great Depression, anyone who could supply jobs was welcome. (This itself is a sad and telling commentary about working-class life.)

Sick, disabled, and dying, the women were truly on their own. But they fought back, and they didn’t give up. Their fight changed the world. Labour laws changed, scientific and medical knowledge were advanced, and precedence was set for greater corporate accountability.

Fans of Hidden Figures and the less famous but equally amazing Glass Universe will want to read this book. If you enjoy hidden histories, stories of struggle and perseverance, and real-life heroes a la Erin Brockovich and Karen Silkwood, this book is for you.

My only criticism of The Radium Girls is the writing itself. It could have used another round of editing to tighten up excessive detail and delete some unprofessional colloquialisms. Whether anyone who is not a writer or editor will notice, I don’t know. Any qualms I have about the language are far outweighed by the riveting story.

(Versions of this review has appeared on wmtc.ca and the Mississauga Library Nonfiction Book Blog.)