Bill 148, the Fair Workplaces, Better Jobs Act, is now one royal rubber-stamp away from becoming law. The bill comprises the most significant changes to Ontario’s employment standards in 20 years.

This represents a huge victory for workers — a model of what is possible when working people organize and work together for the common good.

This bill is the direct result of a huge, worker-led campaign, over many years, which brought together nonunion and union workers, supported by brains, muscle, and funding from the Ontario Federation of Labour, and incredible research on precarious work by United Way and McMaster University. Members of CUPE 1989 can all be proud that CUPE Ontario was at the forefront of this struggle. 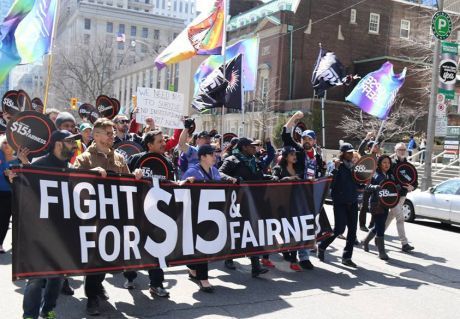 This victory also comes with a warning. The bill did not pass unanimously. The Ontario Progressive Conservatives voted against Bill 148, and if they form a government in the next election, they will seek to overturn it. The Tories propose bringing the minimum wage to $15 in 2022 — three years later — and they oppose many of the other reforms that are now law.

Here’s a quick summary of the provisions of the Fair Workplaces, Better Jobs Act.
– Minimum wage increases to $14/hour on January 1, 2018
– Minimum wage increases to $15/hr on January 1, 2019
– At least two paid, job-protected sick days per year for all workers
– Part-time workers doing the same jobs as full-time workers must be paid the same wage
– All workers must have 10 emergency, job-protected, annual leave days
– All workers with a company for five years or more must have three weeks vacation
– Employers can no longer demand doctors’ notes when a worker has been out sick
– On-call workers whose shifts are cancelled with less than 48-hours notice must be paid for three hours of work
– The Ministry of Labour will hire 175 new workplace inspectors, doubling enforcement capacity
– It will be easier for workers to unionize — or at least some of the barriers to organizing will be reduced

We note with great pride that by the time the Ontario minimum wage increases to $15/hour, CUPE 1989 Library Pages will have been earning at least that for almost four years. However, our members who work part-time will benefit from many other provisions of this law, as the City of Mississauga will be forced to catch up with provincial labour laws.

Bill 148 did not go as far as we wanted. For example, the campaign was pushing for seven mandated paid sick days per year. The big-business lobby opposed any mandated paid time off. The final bill provides for two paid days. Similarly, the campaign called for a two-weeks-notice scheduling provision; the bill contains a 48-hour provision. This is a great lesson in “Demand More“.

One gaping hole in Bill 148 is a lack of equal protections for workers hired through temp agencies. Workplaces are still not liable for temp-worker injuries on the job — and because of this, safety standards are lax, and temp-agency workers are significantly more likely to be injured. These are usually the most vulnerable of all workers.

We still have a lot of work to do — but we also have a lot to celebrate.