This post continues CUPE Local 1989 labour-themed book reviews and readers’ advisory lists. You can read our earlier review of The Radium Girls here.

If you read a book or see a movie that you’d like us to review, drop us a line at president@cupe1989.org. 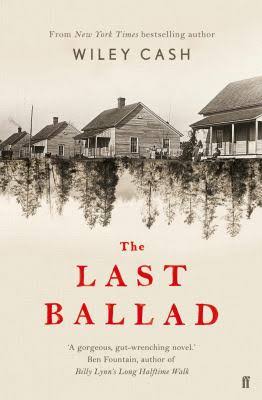 Ella May Wiggins was a textile worker, a labour activist, and a “balladeer” who wrote and sang songs for the movement. Wiggins — who was killed during a 1929 strike in North Carolina — is not as well-known in the labour movement as she should be. Wiley Cash’s The Last Ballad goes a long way towards changing that.

In this historical novel, we meet Wiggins, a single mother struggling to provide for her children on the $9.00 she earns for a week’s work at the mill. Wiggins walks miles to her 12-hour shift, returning to her shack where her children are always hungry. At least Wiggins’ children are safe. In the mill, children’s small hands are put to use clearing clogged machinery – machines that are not turned off. Mothers can only hope their children’s reflexes are fast enough to jerk their hands away before they are mangled. For the mill owner, the loss of fingers or an arm is just another worker sent away without pay.

When Ella stays home to care for a sick child, her boss informs her that if she “chooses” to miss a shift again, she won’t have a job to return to. Fed up and searching for relief, Wiggins attends a labour rally. When she gets up to sing one of her songs onstage, she becomes a organizer – and a target.

Despite the grueling conditions at the mill, unions are reviled and their “radical” ideas -– a five-day work week, a standard wage -– are branded as communists. Wiggins’ own views, that black and white workers should be organized together in a single union, make her a target even among the working class.

Wiggins is the central figure of The Last Ballad, but the story is told from diverse perspectives. We hear the voices of a black train porter, the mill owner, and some voices from our present time, when Wiggins’ surviving daughter, now an older woman, writes about her mother’s life.

The 1929 textile workers’ strike in Gastonia, North Carolina was not a victory. The mill owners refused to negotiate and the starving workers returned to the mill without winning the improvements they sought. The Last Ballad tells a story that is tragic and infuriating — but it’s a story we need to know.

Some people believe unions are no longer necessary. Yet working conditions in many countries today are not much better than what Ella May Wiggins endured. Even in our prosperous and enlightened land, without unions, how long would it take for working conditions to deteriorate to unacceptable levels?

You can learn more about Ella May Wiggins through the Ella May Wiggins Memorial Committee, “a group of individuals with family, academic, community and historical interest in Ella May Wiggins and our textile heritage,” who are dedicated to creating a proper memorial for Wiggins in the town where she lived and died.

The Last Ballad is available at your local library.