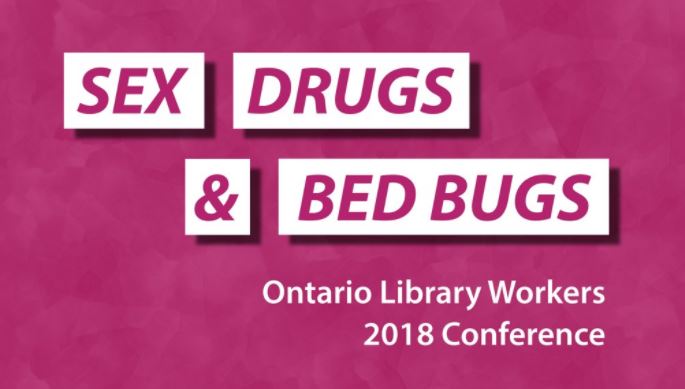 Members of the CUPE 1989 Executive Board attended the CUPE Ontario Library Workers Conference last week. The amusing title — “Sex, Drugs & Bedbugs” — was a light take on a very serious theme: health and safety in the library workplace. As always, the conference was affirming and inspiring — library unionists coming together to share information and use collective action to advance the greater good.

John Cartwright, President of the Toronto-York Regional Labour Council, welcomed delegates to the York Region. The Council has fought for justice since 1871 — first economic justice, then racial justice, and now climate justice. Brother Cartwright reminded us that libraries have been a part of these struggles from the very beginning — giving immigrants and newcomers access in a class-driven society. He also reminded us that two important elections are coming up. At both the provincial and municipal levels, these elections are about nothing less than what kind of Canada we want to build.

Dawn Bellerose, the Aboriginal Workers Representative on the CUPE Ontario Executive Board, gave the aboriginal welcome. CUPE 1989 joins many CUPE library locals in seeking to include and feature aboriginal issues in our libraries wherever possible.

Next, we were treated to a welcome by CUPE Ontario President Fred Hahn. Brother Fred’s speeches are always inspiring, but in these trying times, his words are more welcome and more needed than ever.

Fred focused on the upcoming Ontario provincial election. Corporate taxes are the lowest they’ve been since 1930. And 20 years of frozen public spending under Liberal governments have left us with a 42% decrease in resources. Ontarians have been living through the implications of these reductions. Hallway medicine. 30,000 seniors waiting for long-term care, and when they do finally get a spot, a desperate lack of workers to care for them. Skyrocketing student debt, and no decent jobs after graduation. Ontarians are angry at Premier Kathleen Wynne and her government — with good reason. But, Fred urged us, let’s not allow anger at the Liberals to make things worse! Conservative leader Doug Ford talks about shaving four cents off every dollar of public spending. We cannot afford more public service cuts, more privatization. We need a government who will invest in public services.

This October, if we want to begin to reverse this situation, there is only one clear choice: the Ontario NDP. Andrea Horwath is rolling out a platform that includes full pharmacare, dental benefits, affordable childcare, and relief for student debt. If the 1% and the corporations pay their fair share, it’s all within reach.

Brother Fred gave a shout-out to CUPE 2424, on strike at Carleton University to fight pension theft, and CUPE 3903, on strike at York University to improve learning conditions. Did you know teaching assistants at York carry a full 60% of the teaching load — yet they are part-time, precarious workers? All union members should think about how they can support these courageous strikers.

CUPE Health and Safety Specialist Andie Chenier spoke about mental health — our own, and the daily challenge of library workers who serve customers with a variety of mental health issues.

Did you know one in five Canadians identify as having a mental health challenge? That is twice the number that have heart disease or diabetes. The most common mental health issues are anxiety and depression, issues related to substance abuse, and cognitive disorders such as dementia. All that, yet only 7.2% of our healthcare budget!

Sister Andie facilitates mental health first aid, a training that all library workers could benefit from. She mentioned that when people feel that their work is not valued or under-valued, that can contribute to depression. Sound familiar? Andi noted that we should try to get language in our collective agreements for mental health first aid training, both for our co-workers and our customers.

Perhaps the most significant takeaway of Andie’s talk was tips on how to respond when people disclose their mental health challenges. It’s very difficult to reach out. The stigma is still very great, and it takes a lot of courage to open up. So how we — library workers and fellow humans — respond has a potentially huge impact on a person who is trying to connect with us. “Your job is not to fix them,” Andie said. “It’s not about you.”

So what can we do? Respond with compassion. Listen. Don’t judge. Don’t prescribe. Don’t talk about your own life. Instead of “you really should do this,” try, “Have you thought about trying…?” or “I’ve heard that this might be helpful…”. Library workers can keep a list of resources and social services. But most important: listen. Listen with compassion.

Andie mentioned CUPE’s mental health learning series, and urged us to advocate for our members with a two-pronged approach — both in our labour-management meetings and through our joint health and safety committees. Remember, WSIB now covers chronic mental stress.

The most moving part of the conference was a talk by Zoe Dodd. Zoe is an outreach worker who has worked with marginalized people with HIV and Hepatitis C. Now her work has shifted to the opioid overdose crisis. She and her co-workers — who are mostly volunteers — had been telling the government that this crisis was looming for the past decade, but their alarm fell on ears that refused to hear.

Now the deaths from fentanyl overdoses eclipses those from HIV at the height of the AIDS crisis. Last year there was a 52% increase of fentanyl deaths over the previous year. Yet Ontario has refused to call this a public health crisis. British Columbia is the only Canadian province to declare opioid overdoses a public health emergency — and this has saved thousands of lives.

Death by overdose, Zoe told us, is preventable. The majority of those affected are already marginalized people living in poverty. (Indigenous people are 400 times more likely to die of an overdose than the general population.) Thousands who survive end up in comas, on life support.

There were coordinated emergency health efforts for both H1N1 and SARS outbreaks; lives were saved by those decisions. But when it comes to drug use, governments spend almost exclusively on enforcement, rather than harm reduction. That is, they treat drug addiction as a criminal issue rather than a health issue. This is a moralistic decision — and a lethal one.

Frustrated and angry over both Ontario’s and the City of Toronto’s inaction, Zoe and her comrades acted on their own. They brought 10,000 vials of naloxone — the drug that reverses fentanyl overdoses — into Canada before it was legal. They raised $95,000 online. They pitched a tent and opened a site, staffed entirely by volunteers. We were so proud to learn that CUPE Ontario bought the group a trailer, so they could safely serve more people. This intrepid band of volunteers forced Ontario and Canada to change their policies. Now harm reduction sites are opening across the province — including in Mississauga. (Please read more about Zoe and her work here: “Meet the Harm Reduction Worker Who Called Out Trudeau on the Opioid Crisis”.)

What does this have to do with library workers? Only everything. Libraries, as public spaces, are often places of drug use and of overdose. Library workers across North America are being trained in the use of naloxone, and they are saving lives.

Zoe addressed some myths about naloxone use, demystifying the process for all in the room. Many people — including 1989 officers — thought there was a danger of a person coming out of an overdose becoming aggressive and violent. Turns out this is simply untrue. Typically a person coming out of a drug overdose is groggy and confused. Their brain has shut down from lack of oxygen, and naloxone is beginning to restore the flow of oxygen to their brains. Far from being violent, they are only gradually waking up.

Many people believe that administering naloxone is dangerous, as we can be exposed to fentanyl or naloxone. This is also untrue. Fentanyl must be ingested to be harmful. Naloxone, Zoe said, is virtually “idiot proof”. If a person is not overdosing, the drug has no effect. But if they are overdosing, it will save their life. (Note that more than one dose of naloxone may be needed.)

The most moving and disturbing part of Zoe’s talk was hearing how she and her co-workers have suffered. Outreach workers and the people they serve are often one community. The pain they witness and endure is staggering. In one year, Zoe lost 30 clients and six friends. Outreach workers have committed suicide, overwhelmed by grief. There is a secondary crisis of trauma among the workers who have witnessed so much death. Now these workers are using their grief and anger to drive change. It was incredibly moving and inspiring.

The executive officers of CUPE 1989 want to get involved. For starters, we’ve decided on a three-part course of action. One, we’ll get trained in the use of naloxone. Two, we will share this education with our members and our employer. And three, we will advocate for a greater role of social services in our libraries. We hope to host Zoe Dodd in our own libraries. Stay tuned!

Watch this video to see how library workers are saving lives.

There were other excellent and fascinating talks at the conference, too.

On our final afternoon, library workers joined other municipal workers at the OMECC Conference for one afternoon. Trish Hennessey from the Canadian Centre for Policy Alternatives (CCPA) talked about the effects of automation on our jobs, and employment lawyer Daniel Sheppard talked about Bill 148.

Even with all these excellent speakers, perhaps the most meaningful segment of our conference is always the local reports. Hearing from library locals from across the province is a powerful exercise in solidarity. We all share the same burdens, especially gross understaffing, part-time jobs, and low morale. And we also share the same strengths — a small group of determined unionists, and the power of collective bargaining.